skip to main | skip to sidebar

Other places to find me:

Ghostbusters circa 1775 or so

Well, I probably won't have much in the way of new one-page comics until I'm done inking Unpleasant People #4 (whenever THAT is...) since any and all spare time I devote to comics is being devoted to getting that done. In the meantime, I present color-experimentation from my sketchbook. 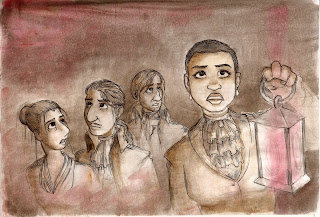 I've been tossing around the idea of doing a supernatural-adventure webcomic about ghost hunters in late 18th Century Vienna. 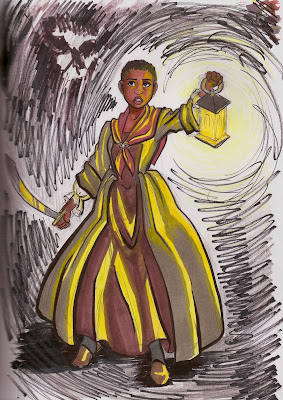 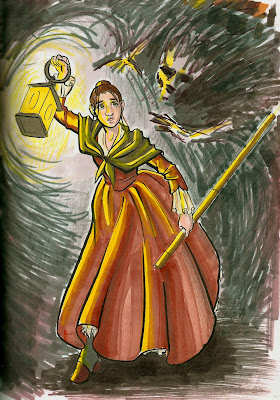 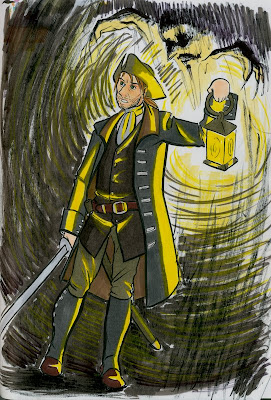 Portraits of three of the four main characters done with marker, colored pencils and brush pen.

I've bounced ideas off of a couple friends (thanks, Andy!) and so far don't have a complete script for the first chapter. At this point, I'm not even sure if I'm going to follow through with it at all. However, my almost manic love of ghost stories will probably push me forward on this. It's simmering on the back burner for now. 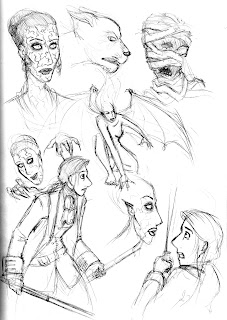 Some Pleasant, and Unpleasant, People

First off, I know this is kinda old news, but after a wait that seemed like eternity, "Avatar: Legend of Korra" (sequel to the masterful animated series "Avatar: The Last Airbender") is finally here! It seems that perhaps the animation isn't quite as smooth as "The Last Airbender", but maybe it's because I was so dazzled and hadn't seen anything like it before. I sort of miss the whole journey aspect of the first series, too, but I love this one to pieces anyway, and I'm so impressed with the world-building. Again, these people did all their homework and created a three-dimensional, complete world and populated it with engaging, well-rounded characters. Anyhoo, this was my reaction: 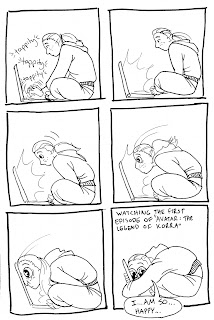 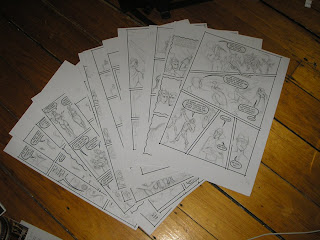 In the me-centric news department: I finally finished the pencils for "Unpleasant People #4".
I've started inking it (starting with the lettering and panel borders) and hopefully it won't take too long. A big shout-out to my pals Mo Oh, Matt Aucoin, Jose Luis Olivares and Denis St. John who gave me their feedback and helped me present a more polished comic. So here's a couple portraits of the character Magda. A lot of issue 4 is about her back story. I was going to save the pencil sketch to put in the comic at the end, but Magda's head is so frikkin' big, I'm just going to draw something else. 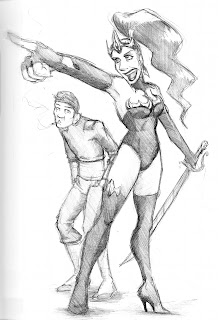 As for stuff I'm watching that inspires me: I've been having "RuPaul's Drag Race" marathons. In the first season I was completely taken with Pandora Boxx. She was funny, intelligent and beautiful both in and out of drag. She was absolutely enchanting for the whole competition. 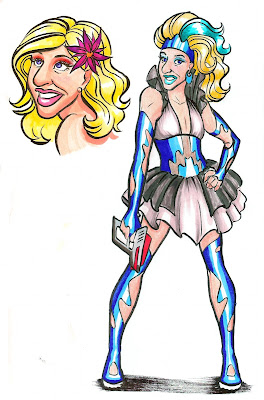 Her nose is a little too big in the left-hand picture. In the right, she's a space princess gone rogue. And that's that.
at 4:05 PM No comments: 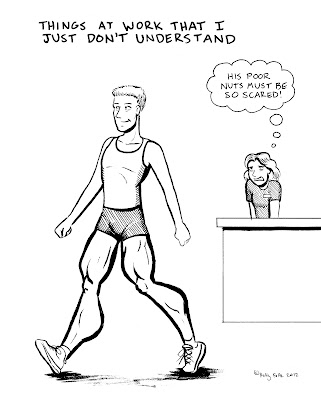 Okay, so I have good excuses this time for the lack of blog updates over the past few weeks! April was crazy! It felt like everything that could possibly happen to me, happened to me in April: did my taxes, got really sick, juggled two jobs for a little while before switching and had two conventions in two weeks! April had its ups and downs, but I'm glad it's May now. I've decided to take it easy this month. I'm also getting close to finishing the pencils for "Unpleasant People" #4. Just a couple pages left. I want to go to the Massachusetts Independent Comics Expo in the fall and I want to have two new books by then (the aforementioned "Unpleasant People" and another issue of "Brain Parts").

Speaking of conventions, I had a great time at the Boston Comic Con and the Museum of Comic and Cartoon Art Festival in NYC.


At the Boston Comic Con I tabled with my good pals Matt Aucoin and Jose Luis Olivares. We had a great time and even put together a little anthology called "School Pencil" the night before the con. It was a combination of one-page works from all of us, plus some jam comics. Matt drew the fabulous cover. It's a pretty awesome cover. I don't want to jinx it, but odds are, there will be a "School Pencil" #2. 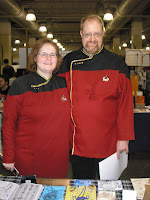 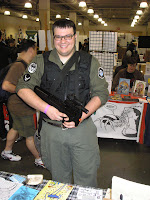 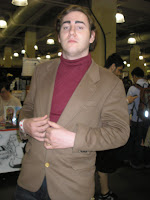 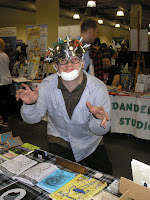 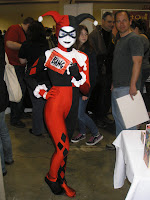 Some of my favorite costumes from the con here in Boston: Starfleet, of course, I nearly shit myself when I saw a "Stargate" costume (first time I've seen one at a con), also the first time I've seen Carl Sagan cosplay (apparently not a lot of people were recognizing him. For shame, science fans!), I liked that this Harley Quinn was faithful to her costume in the comics and show (I'd seen enough interpretations), the Keymaster is always a hit, where else do you see Indiana Jones face off against Lady Deathstrike, and I loved these Doctor Who ladies (does this mean the Tardis is also the companion?). 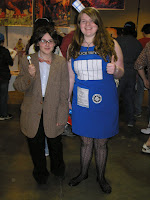 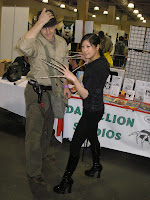 A nice fellow named Rich Johnston stopped by the table to chat and shared some fruit snacks with me. If I had known at the time that he was a journalist, I would have tried to act more intelligent. But he did end up mentioning Matt, Jose and myself, as well as some other great exhibitors in an article he wrote about how great Boston Comic Con is. And it certainly was great. 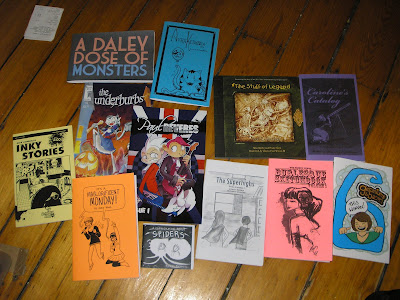 Some of the great stuff I picked up at Boston Comic Con: "A Daley Dose of Monsters" by Rich Daley, "Avra Kedabra Vol. 1" by Elizabeth Neronski, "The Stuff of Legend, Book 2: The Jungle" by Mike Raicht, Brian Smith and Charles Paul Wilson III, "Caroline's Catalog" by E. J. Barnes, "Geraniums & Bacon #6" by Cathy Leamy, "Kristilyn's Burlesque Sketchbook Vol. 1" by Kristilyn, "The Superhighs" by Dani Marie and Jessica Vitali, "A Conversation about Spiders" by Aya Rothwell, "It's A Maglorificent Monday" by Andy Wong, "Inky Stories" by Dave Marshall, "The Underburbs #1" by Joe Haley and T. J. Dort, "Paul and the Reveres Issue 1" by Tina Pratt


MoCCA was a blast, too! Got to stay with my good pals Katherine Roy and Tim Stout (also alumni of the Center for Cartoon Studies). I also got to see my pal Kenan Rubenstein and pick up one of his great teeny comics. If you haven't checked out his shit, you should check out his shit. 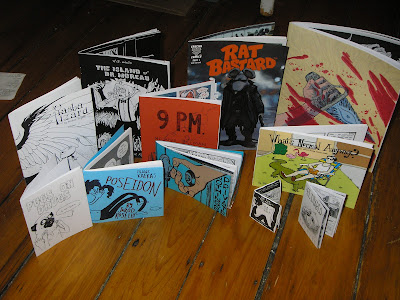 A sampling of the great stuff I picked up at MoCCA: "Yasha Lizard" by Kristina Stipetic, "The Island of Doctor Moreau" and "Pugs on Drugs" by Kat Fajardo, "Rat Bastard Part 1" by Cliff Galbraith, "Amelia Part 5" by Denis St. John, "What's Normal Anyway?" by Morgan Boecher, "9 P.M." by Melanie Gillman,  "Franz Kafka's Poseidon" by Jarod Rosello, "Nothing is Private" and "El Diablo" by Luis Enrique Echavarria Uribe, "On the Beach" by Kenan Rubenstein
And since I feel bad that I've been neglecting my blog for so long, here's another comic to close out this post: 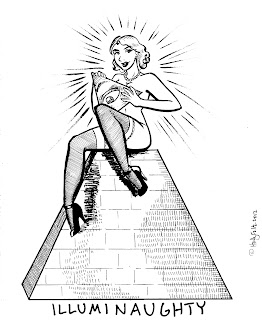 Holly
I'm a cartoonist and illustrator living and working in the Boston area. You can contact me at hollyfoltzcomics@gmail.com

Check out these guys: